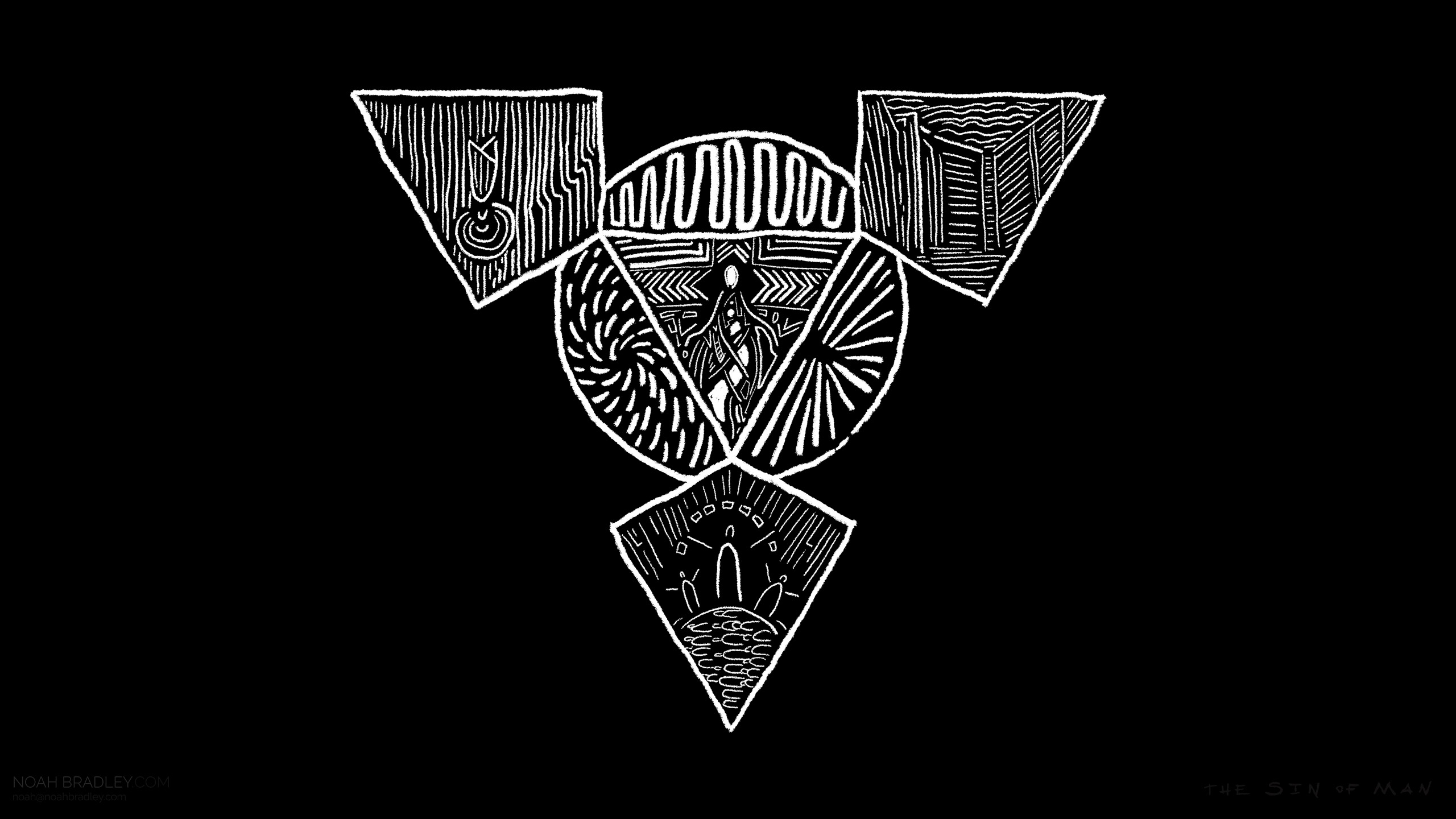 “Our souls to be free and our hearts to mend,
For the beauty of life is in its end.”

The holiest day for the Peaceful began with a resounding boom that echoed in the narrow valley. Frost clung to the hard ground but still the birds sang their songs.

He sat on his mat with legs folded, eyes closed, and palms to heaven below. He let the deep resonate sound warm him as the last echoes faded. The pools and rivers under and in the temple rippled in gentle harmony. They swirled around rocks and ice grew along the water’s edge. He felt the wind and the spray from the waterfalls chilling him.

He rose and glided past the carved columns to his room. There were rows and circles of his brothers and sisters in rooms beginning their daily meditations. They sought their path to peace.

He had arrived at the eastern temple fifteen winters ago and he had grown lean of body and clear of mind. He understood all that he did not understand, and even understood that he probably did not really understand that. He tried to be good, but knew that he might not be. He prayed daily to Our Divine End and She never answered his questions, pleas, or demands. He listened to his elders, taught his pupils, and shared with his brothers and sisters. It was the closest family he ever had.

He had come here to seek peace and he found it. Then he shared peace with many outside of the faith. Near and far, young and old, fathers and farmers, mothers and murderers. Peace was conveyed to many and he rejoiced in it.

He went to his bed at the end of a long line of identical cots. They were made of strips of worn wood and had a stone block at the top for their heads. A white robe was draped on his bed. He disrobed and donned the stiff, new one. The weavers made it for today especially for him. It was bleak white and nearly as bright as the snow outside.

He had received a brown, tattered robe when he first came. A few seasons later he was given a black one. Then yellow just a short time ago, as a sign that he had become a exemplary missionary of the faith. He was not given many belongings and he liked that.

Some of the others in the temple wrote or painted or sculpted during their life here and left their indelible mark in contribution. His gift was in the form of the Mal-Kiyen, their sacred dance.

He had taken to the art early in his training. He practiced endlessly in sun and moon and rain and wind and snow. The Mal-Kiyen can only be performed in the elements of nature because it is a response to nature. Masters feel the rhythms of earth and life and move with their flow. But to move with the flow only brings a practitioner to the brink of mastery. True mastery is revelation of how we, in nature, affect the flows themselves. We do not merely move with the rhythm of the universe but create our ripples and waves.

After he attained mastery, he taught. But his greatest joy was in his own practice. He taught out of duty but he danced out of purpose.

He would leave no scrolls or ink in legacy, only the memories of his dance for a fortunate few. One of his students will go on to write what he was taught, and even that shadow of a memory will become one of the greatest texts on Mal-Kiyen that ever was.

He picked up his worn and crimson hued staff and walked toward the start of the path. The path was marked with hundreds of flags, fluttering in the frigid wind as they traced the switchback stairs in the side of the valley wall. It reached to the gray skies above and the rim of the valley obscured by cloud. Waterfalls cascaded out of the gray unknown, pouring into the pools and rivers that populated this idyllic valley. The mist shimmered and suffused the world in an ethereal daze.

The first step on the path was a massive stone, carved into a great arching contour. It had been here longer than anyone remembered, but at least a few of the adepts believed that giants had formed it.

He lifted his foot and placed it gently on top of the first step. He had hiked this trail many times and he revered it still. He started his climb undaunted by the biting cold on his skin. His mind was at ease.

When he cleared the timberline he looked to the temple stretched out below. He saw the courtyards and paths and bridges and shrines that were his home. He saw the small figures and heard their distant chants.

Further along, he arrived at the first waystone: the sculpture of Ahn. Ahn was the first Peaceful. He was the first to embrace Her cruel message and see it for what it was—the path to peace.

He wrote the first of the scrolls now known as the Word of Peace. He recorded the course of his life, beginning as a mercenary and the terrible deeds he committed for coin. He struggled with every life he stole and was led to his great revelation. He encountered the Goddess and he was changed. He transformed his body, life, and words into instruments of peace.

His sculpture was simple because it was created long after his broken body was in the ground. No one remembered what he looked like, so there stands a sculptor’s guess. A heroic figure, muscled and proud, with his eyes set to his feet in prayer. Now the snow piled deep in the crevices and the surface shimmered with a skin of ice.

The man continued to climb. He heard another echoing boom. The sound was deep, sudden, and short. He remembered the first time he heard that sound here. It was half a lifetime ago but he will never forget. It brought trepidation that turned to joy. He felt now only joy.

He stopped to thank Her before carrying on.

The clouds turned to dull softness and snow drifted along the path. His steps made a muffled sound with every stride. He heard each breath. It was a perfect day.

He came to the next waystone. It curved in strange, dreadful, beautiful ways. The forms spoke of fell thoughts and madness made true. The sculpture was made by a nameless follower of Ahn. He was only nameless because he seemed to have forgotten to write his name anywhere.

He wrote journals, though. Most were rambling and senseless, especially near his end. He sculpted the waystone after an intense, extended, and painful trance. In his trance he was taken away by Her and shown the forms of the end of life. They were sights that living man should never witness. After this experience his writing and sketches became increasingly maddened. He attempted to capture the experience in stone. He died some time later, chisel clutched in a bloodstained hand.

The man now stood before the waystone and cherished the snow that somehow made the forms more inhuman. He feared and relished in his fear. No one grows numb to visions of a Goddess.

He meditated for a time and felt the essence of his life and the frigid air stinging his nose and spreading within his body. Thoughts wandered by. The last time he went fishing. Snow settling on his knuckles. His thirst. His first teacher at the temple, who always told him to be more like water. Today.

The Day of Peace celebrates the soul’s coming of age. It honors the Peaceful who are ready to receive it fully and forever.

Lost in his breath, he heard the muffled sound of another booming note as it filled the valley.

He rose carefully from his meditations and slipped away, leaving the sculpture to bare its lonesome truth.

The trail became more treacherous as the end approached. The way was unforgiving.

Some time later, tired but undaunted, he arrived at the top of the valley wall. The sheer cliff was a short span to his side and he heard the near but unseen waterfalls flowing into the vast nothingness beyond. The rocks were slick and the winds fierce but his body was strong and his steps sure.

He handed his staff to one of his older pupils. The old woman had a withered face and bright eyes and they filled with tears. The staff was carved into a weighted blade at the top and had served him well on his campaigns of peace. He had traveled far and seen places he thought were only rumors and legends. He saw people of all sorts and creeds. He had grieved at their sin and gloried in their salvation. With every swing of his staff, another soul was set free of sin and pain and fear.

He brought them the grace of peace we find in death.

As they sat to meditate together and fix their minds on Her, Our Divine End, they heard the crisp sound of the icy river behind them. The cold stone they sat on sapped any remaining warmth.

They all rose and he embraced them again. Their paths would find him, someday.

The snow had stopped and the brittle wind cut over the barren plateau. He advanced toward the sound of toppling water. He felt the sounds change as he approached the edge. He heard the raw strength of the water and he heard the silent emptiness of space before him.

He stood in wonder and reminisced on his lives. He cherished the pain and the lies, the trials and the rewards, the love and the loss. He looked to his feet on the rock’s edge and just beyond at the distant valley floor, from here only patterns of white and black.

The water tumbled away and the spray coated him in glistening light. He faintly heard Her call to him.

He spread his arms and stepped forward into nothingness and joined the water to plunge toward heaven.